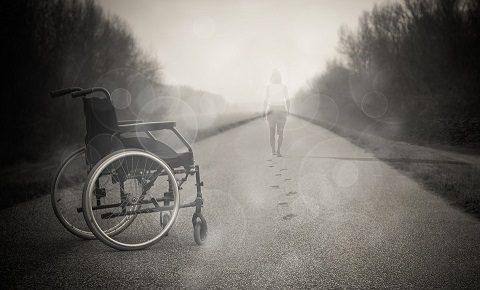 We were in a hurry trying to catch a bus that was already waiting for us. My mother told him she was in a hurry and was much too small to get him across the street safely.

After paying the bus fees for her four sons and herself, she started feeling bad and asked, “How was he going to get around after he was across the street?”

I told her there was a wheelchair on the other side. She pulled the bus cord and took her four sons back to help him.

“Thank you and your boys, Young Lady. I been trying to get across for three hours.” He said as we got him in the wheelchair.

“Here.”
She refused the money he offered.
“Here boys.”
The look she gave her boys scared even the stranger so he put the money back in his pocket.

“Thank you. I’m going to sit here and rest until I go home.” He said.

When we got on the next bus, Momma was still concerned because it was about to rain.
The bus driver saw her discomfort and radioed the bus going in the opposite direction to check on the man.

Seconds later, the bus driver radioed back. No man. No wheelchair, nothing. He asked a lady that got on the bus about the man.

“I haven’t seen anyone.”

Momma smiles and says, “Always stop to help an angel. It helps you get to heaven.”

On Sunday, I stopped by this Caribbean restaurant named Pollo Tropical.

I heard this homeless guy cry out with the strongest Southern accent I’d ever heard in my life.
“Hey, Mister!”

A matured white man and I turned around at the same time and faced the direction of the voice.

To my surprise, he was African American. The other gentleman kept going.

“Sir, may I have a dollar to get something to eat?”

Momma whisperers in my ear. “Always stop to help an angel. It helps you get into heaven.”

“Come on in man. Lunch is on me.”
The cashier sees what’s going on.
“That’s so nice.” She says.
“Get whatever you want and fix him something to go also.”
I wink and point up to Momma and say.
“Just being obedient.”

The feature photo is from Pixabey﻿