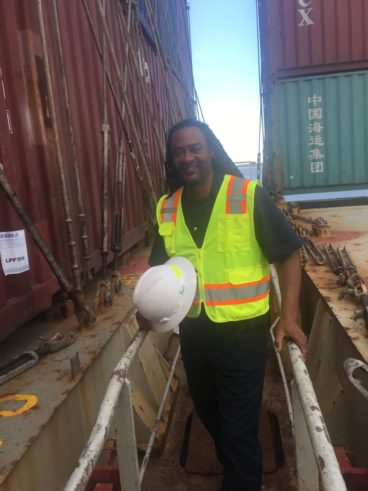 An Army veteran and his imaginary friends share a center table in the E-bar at Nordstrom. This is a regular spot where they meet to release emotions, adventures, and conflicts that become the best literary works of Jacksonville author Kenneth Thomas Sr.

Thomas, who is a longshoreman, said those friends just show up and tell him what they are doing, how, and “sometimes they’ll tell me why. Then, I just write.”

“They aren’t all friendly,” he chuckles. “Some of them are downright evil and cruel.” But most of them become characters within his manuscripts or short stories.

To someone listening in, Thomas sounds a little “off”. Here’s a fifty-something grandfather of three laughing with the voices and plots swooning through his head while listening to music and clicking out paragraphs and paragraphs of his third manuscript onto the screen of his iPad Pro. “I don’t know what I look like to others but, to me, I am living a dream,” he said.

For nearly two decades Thomas worked on his debut novel, writing and rewriting the book between military duties, marriage, fatherhood, and full-time jobs. This February, he released Given Not Taken through Jozef Syndicate, an independent publishing company based in Louisiana.

Given Not Taken evolves from a passionate love story into a violent mystery with high crimes including human trafficking and organ theft. Thomas takes special care to blend the oftentimes complicated worlds of a German American surgeon and her Black American lover.

Set in Jacksonville, Florida, Given Not Taken is an intricate tale of how the violence from one passionate night between lovers sets into motion a series of events that would soon reveal a plan to destroy a family empire, a lover’s life, and the lives of young, stolen immigrants. As the book evolves, evil must be stopped without the wrong man being framed. “This book is suspenseful, surprising, and intriguing! It has plot twists that are so unexpected. I can’t wait to see what else this Author produces! For a debut novel it has depth and describes human vulnerability! Read it and get your fix!,” wrote a reader on Amazon.

Since its release, Thomas and Given Not Taken have pulled in readers from 11 states in America and two counties in Germany. Before its release, the romance mystery was named a Must Read for 2016 by nationally syndicated radio host Cyrus Webb of Conversations Live.

“This journey has been amazing,” he said, “I am so blessed and grateful for all my readers and the book clubs.”

Thomas and his wife, Felicia, have three adult children, Kenneth Jr. Kenicia and Kent. He plans to release a German-version of Given Not Taken February 2017. For now, 2016 is shaping up to be a busy year for Thomas who is planning signings in Georgia, Germany, and Mexico while finishing a two-book commitment with Jozef Syndicate.

One thought on “Veteran, longshoreman pens next best seller”